Joined Jan 9, 2005
·
178 Posts
I posted a thread before the weekend about the upgrades I was making to my Specialized Allez Pro. In this thread I'm providing a ride report and some picture of the installed upgrades.

This is what I bought/upgraded.

First off, I was happy from the onset with my Allez Pro project and loved the way it rode and handled as originally equipped. My intent was to get the bike lighter, not necessarily improve the ride per se. I took it out for a 35 mile ride today (beautiful sunny 70° day!!) and was pleasantly surprised on a number of counts.

I had no idea how comfortable/uncomfortable the SLR was going to be. When you put it along side the Arione, it is both narrower and shorter providing a smaller riding surface and fewer fore/aft riding options. To my surprise/delight, the SLR was very comfortable and I felt very little difference between it and the Arione. Granted, this was over 35 miles and things could be quite different over a longer distance. The jury is still out on limited choice in riding positions, but I had no problem with it today. In any case, my sit bones seem quite happy with the SLR.

The Pedal Force seatpost was added, once again in an effort to reduce the weight of the bike. What I discovered, is that the setback of this seatpost gave me a better pedaling position than the zero setback Thomson. I felt stronger on the flats and found the position was great for hills as well. The downside, is that I think I'll have to get a shorter stem than I have now to accommodate the increased setback, but it will be well worth it. The other benefit of the new seatpost was a discernible decrease in road buzz.

Last but not least, my new American Classic/DT Swiss R1.1 wheels as compared to the Korso's are a huge improvement. I really like Korso's and they were a good match to the Allez Pro, but the new wheels spin up much faster and are noticeably better on hills. The 28/32 spokes with the 2X / 3X mix ride much smoother than the Korso's which coupled with the reduced buzz provided by the new seatpost, the ride feels close to my TST titanium (I said close, not the same!).

All in all, I'm very pleased with the weight saving and the improvements in ride this little experiment has provided. 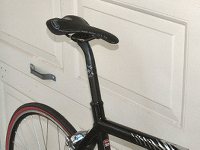 Glad to here the first ride was a god experience. I rode my AC yesterday in a hell of a wind and was glad to have lower profile rims. The hubs are still feling great too.

I've gone thru the progression of SLR models and found the Carbonio that you have more comfortable than the standard SLR, I guess it has something to do with the carbon rails. The king of comfort in the SLR is the C64 and the lightest. If you ever get a chance to ride one you will see.

Joined Jan 9, 2005
·
178 Posts
I saw your original post when you picked up that saddle, my gawd it's a thing of beauty. Nice to hear it's comfortable as well. I never thought about the benefits of the carbon rails as it relates to comfort, very good point.
C

Growing Older, Not Up

All the talk of saddles has me doubting the stock one on my ride. My tail starts hurting after an hour. I thought thats just the way things were but maybe not with right one, no?
What do you guys think? Should I look to blow some spare cash to replace the stock Avatar saddle on my Allez Elite at some point in the future?

Joined Jan 9, 2005
·
178 Posts
crumjack, thanks for the nice words on my Allez Pro, I'm really enjoying it especially with the new tweaks.

As far as saddles go, it's so personal that someone telling you to scrap what your using and try saddle "X" because it's so great are only relating their own experience which may mean little or nothing to you and your butt. It's best to try a saddle if possible, either through your LBS or perhaps a friend who has a model you're considering. Performance had a total satisfaction guarantee, so if they have a shop near you, you can't go wrong.

I have the Fizik Arione on a number of my bikes, as I did on the Allez Pro, and I really like that saddle a lot. What I just can't figure out, is how a wafer thin saddle like the Carbonio SLR cab be so comfortable, but it is - "for me". Good luck!
1 - 5 of 5 Posts
Join the discussion
Continue with Facebook
Continue with Google
or sign up with email
About this Discussion
4 Replies
3 Participants
Last post:
blandin Feb 28, 2006
Road Bike, Cycling Forums
A forum community dedicated to Road Bike owners and enthusiasts. Come join the discussion about bike parts, components, deals, performance, modifications, classifieds, troubleshooting, maintenance, and more!
Full Forum Listing
Explore Our Forums
General Cycling Discussion Components, Wrenching Bikes, Frames and Forks Wheels and Tires Racing, Training, Nutrition, Triathlons
Recommended Communities