· gastarbeiter
Joined Jul 22, 2005
·
1,524 Posts
Just back from 6 days in northern Lombardia, to get some riding i and take part in the 4th edition of the Gran Fondo Marco Pantani.

I went with the first wave of the group, catching a ride with a friend, who was bringing some old friends of his, who I hadn't met before. After a long drive from the lowlands, we finally arrived at our destination Aprica, a village at +/- 1,200M above sea level, just in time to eat some dinner, and catch the Italy-France game.

While it had rained for the previous 2 weeks, including the day of our arrival, the weather cleared up overnight.

The plan for the first day was to climb the Gavia. My friend had planned out the course, and for some reason I didn't ask any questions. Long story short, we went the wrong way.

Due to road works, we had to take a 17km detour, which was a descent down rough roads, filled with potholes, which were difficult to spot because the pavement was still wet from the previous rain.

Here's a view, looking down the SS48, the main road that connects Sondrio, Tirano, Bormio, etc.

After realizing that we went in the opposite direction, the plan was changed, back to Aprica we went, ascending the Santa Cristina, part of which which is the closing climb of the GF Pantani. 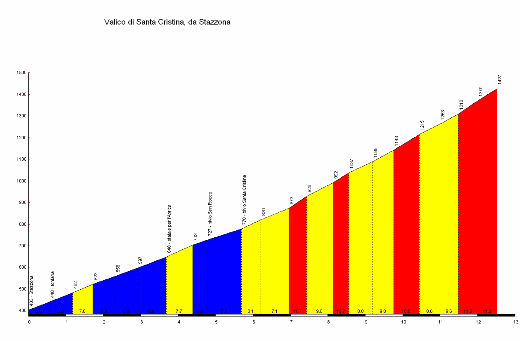 There was graffiti, some old, some new along the way.

After returning to Aprica, we headed down to Edolo in a fruitless quest for a pizza, then it was back uphill to the Hotel.

After +/-1800 meters of climbing, this was just the welcome I was looking for.

On Thursday, the group split in two. For some reason I decided to join my friend, and do a recce of the Mortirolo. At the time, it seemed like a good idea, especially considering the fact the the other two wanted to ride the Gavia AND the Mortirolo.

We had to take the same crappy detour descent, then ride to Mazzo, to start the Mortirolo.

Before the hard part begins.

Old graffiti to the left, and new to the right.

One thing that surprised me is the fact that there are plenty of houses along the road.


Getting close to the Pantani Monument.

After the monument the road 'flattens' to a mere 9-10%, then the trees clear.

The descent that we took, wasn't much of a descent to begin with. If truth be told, there were still some hills to climb, then some rolling terrain.

At least there was a view.

And still some snow.

For the second day in a row, the ride ended lasting at least 90 minutes longer than I planned. I only brought two bars with me, and was getting hungry. That, mixed with fatigue, and what turned out to be a slightly technical descent, resulted in my going down in a switchback.

I was pissed, mostly because I scratched my STI levers, and got a hole in my F1:13s. Fortunately the road rash was light.

Once I got back to Aprica I grabbed a panini, and a pain killer.

· gastarbeiter
Joined Jul 22, 2005
·
1,524 Posts
On Thursday the rest of the group arrived, and the next morning we set off by car to the Stelvio, with the plan to drive to the top, descend to Prato, then climb back up.

The start of the climb, riding past old fortifications.

It starts easy, then opens up.

After 1,800 meters of altitude over 24.5km of climbing, it was time for lunch. I can not tell a lie: the Pizza Stelvio was AMAZING.

An added bonus, the Coppi Monument was 30 feet away from our table.

I washed my bike, shaved my legs, picked up my number, and ride packet, then checked out the expo stands.

The main street in town.

One of the expo stands, with some collectors items.

The place where I knew I had no hope in hell to stand on.

While it's pretty normal to get a jersey as part of your ride packet in a Gran Fondo (or so I believe), the Pantani require you to wear it on the day, under threat of disqualification. The jersey of the first edition was similar to an old Mercatone Uno design, the 2nd was styled after the Pink jersey of the Giro, last years was based on the Tour de France mountains jersey. This year, they choose green, in homage of the Giro mountains jersey.

While I've always preferred a snug shirt, these fir more like a skinsuit.

They also revealed life's excesses. Nope, that's not me.

Watching almost every guy who tried their's on, then go back and ask for a size up was almost comical.

For the record, I sized up, then went back and asked for the medium back, tha I had originally requested. Vanity be damned.

Then, all there was to do was eat dinner, and drink some wine.

After that, the lobby filled up to watch the Holland v Russia game. Needless to say the were many unhappy guests that night.

The next morning was the ride, 4000 meters of altitude, over 172 km. No pics, didn't bring my camera along for that one.

A report on that will be on my blog shortly.

· Registered
Joined Jun 8, 2005
·
783 Posts
Wow thanks for the great ride report and pictures what a beautiful country. That has to be a once in a life time experience:thumbsup:

the pizza, or the pantani shirt?
P

That road with the 48 switchbacks still has me dazed and confused.


I love the road grafitti that says "si al polenta, no al cous cous." Is that really a comment from a foodie, or is there some underlying political statement?

I have a friend here in town that has been trying to get me to do that Gran Fondo for the past 3 years. It always lines up with my wife being out of town at some horse show. One of these days.

· Registered
Joined Jan 2, 2003
·
2,342 Posts
outstanding ride report, one of the best ever. the pic with the switchbacks makes my legs hurt just looking at it.

botto said:
the pizza, or the pantani shirt?
Click to expand...

I dig the pizza shot. And that Pantani shirt pic is....ahem.....one in a million.

I'm using the shot of the Stelvio zigzags. The one with the red car in the lower left corner. A fantastic shot. :thumbsup:

il sogno said:
I dig the pizza shot. And that Pantani shirt pic is....ahem.....one in a million.

I'm using the shot of the Stelvio zigzags. The one with the red car in the lower left corner. A fantastic shot. :thumbsup:
Click to expand...

here's another, from the Stelvio-Bormio side.

· Premium Member
Joined Feb 3, 2004
·
10,106 Posts
Thanks for a great report. I really need to ride in Italy. I almost made it to the Italian border last year when I was in the French Alps. This year I will be in the Pyrenees, so there is no potential for a jaunt to Italy. Maybe next year. Your pictures really make me want to jump on a plane with my bike and just go to Italy.


Okay, you saw through my ruse. Epic journey, thanks for letting us tag along.

jd3 said:
I'd love to do that road. If you drove me to the top and I only had to ride down. Wonderful pix.
Click to expand...

it's pretty much like riding the road down to the river, in shelby forest. :wink:

This is an older thread, you may not receive a response, and could be reviving an old thread. Please consider creating a new thread.