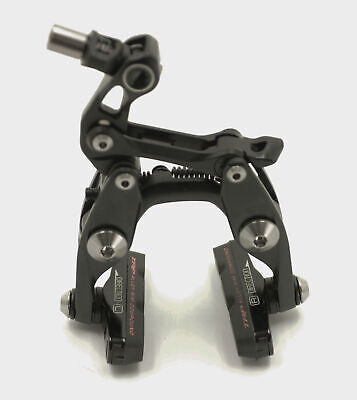 I understand that Shimano rear DM brakes come in two varieties, seatstay and chainstay (they have different part numbers). The reason I'm saying this is because I ordered the "chainstay" variety and apparently it's blocking my left-arm power meter, and guys were saying that try FSA or Bontrager ones because they will allow the power meter to clear.

and fyi, the ebay seller replied to question about this and he said this is for seatstay mount, although he might not know what he was talking about.

Joined Nov 9, 2004
·
15,415 Posts
Yeah, the Shimano brake has 2 models. Bontrager doesn't. The Bontrager is intended for use on seatstays but I'd swear I mounted one under a chainstay at one point. I don't remember a Stages being involved but that very well may have been the reason we tried it.
A

Joined Sep 12, 2011
·
6,703 Posts
update:
brake doesn't work with chainstay mount. Now I see why. The 2 pad holders drop below (and between) the chainstays.
I guess when the seller said this brake was for seatstay, he was right after all.
Oh well, I really like the Bontrager one because it looks sexy and lighter than the Shimano one. Guess I'll have to return it.

Joined Jul 12, 2007
·
2,143 Posts
I believe a lot of people with the power meter clearance issue go with TRP direct mount brakes, you might want to check those out.
A

jetdog9 said:
I believe a lot of people with the power meter clearance issue go with TRP direct mount brakes, you might want to check those out.
Click to expand...

which TRP model? T850 (centerpull) or T851 (sidepull)? or it doesn't matter? and is the sidepull model more powerful of the two?
Sidepull is what the current Shimano one is.